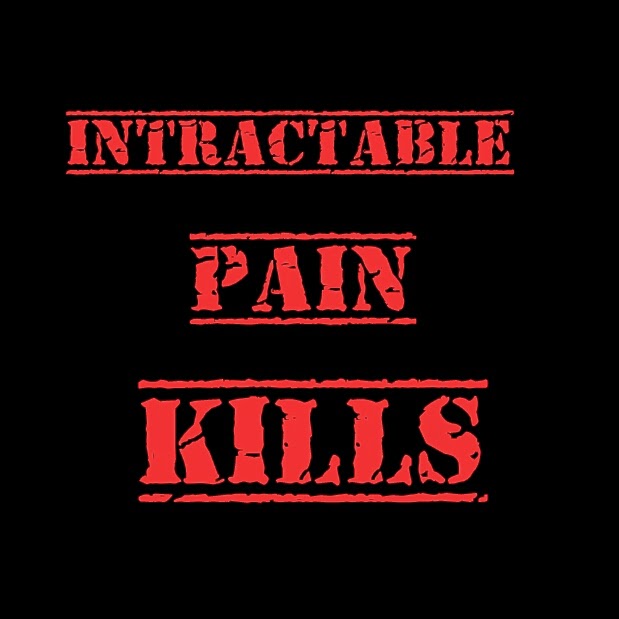 I've been looking for some other CP/IP (Chronic/Intractable Pain) patients who would like to contribute to this site, whether one time, sporadic, or regularly. If anyone is interested, please email me at IntractablePainKills@gmail.com
I'm also open to any suggestions about improving the blog.
IF YOU WOULD LIKE TO COMMENT ON ANY POST, PLEASE CLICK ON THE TITLE TO LOAD THE INDIVIDUAL POST.
DUE TO A GLITCH IN BLOGGER, MY POSTS DO NOT ALWAYS POST IN ORDER BECAUSE THEY POST USING THE TIME THAT I STARTED THE INITIAL DRAFT. I DO MY BEST TO CORRECT THIS WHENEVER POSSIBLE, HOWEVER SOME SLIP BY, SO PLEASE REMEMBER TO READ THE TITLES OF MORE THAN JUST THE MOST RECENT POST IF YOU DON'T WANT TO MISS ANYTHING.

I get a lot of my bed from YouTube and progressive shows seem to be very anti-opioid, so I had to come up with a canned response. Feel free to use it yourself.

***
My wife and I have felt so depressed lately because of the outright bigotry of and assault on chronic pain patients' right to pain control. Every news outlet (especially progressive ones like TYT, The David Pakman Show, Ring of Fire, The Humanist Report, and countless others) have done hit job after hit job in opioids. Most don't even mention that pain patients need them, but almost no one talks about the harms of the illegal CDC guidelines on our community (those guidelines are a facsimile of the PROP petition to the FDA; that petition was denied because it lacked scientific backing and the evidence was on our side). We have made some progress with Kyle Kulinski of Secular Talk, but his appearance on TYT was really disappointing and I was ready to give up on educating people. This story is really what I needed to hear.

Some of the things that I constantly have to correct:
1) Doctors don't get people addicted and they doubt shove pills down your throat. Every person who claims this has done one of the following:
1a) they lied to their doctor (Even in alleged "pill mills"
1b) they took more than prescribed or in a different way than prescribed- they didn't follow directions
1c) they took it for something other than pain
2) State monitoring programs hurt more people that they help and they violate our privacy rights.
3) Drug testing, pill counts, and contacts were meant for addicts, but spread to the pain community. We complied and what did wet getin return? We got treated even worse. Morphine is no different than exogenous insulin and the restrictions on patients should be similar. Just like your body makes insulin, it makes endorphin (ENDOgenous mORPHINe- morphine used to be spelled morphin). If you take too much insulin, you can die from that overdose too. They're both physically dependent and require a taper to safely discontinue.
4) long-term pain patients have a 0.04-0.2% per annum chance of becoming addicted- lower than the general population
5) The decision of the appropriateness of opioids in any given patient should be made on an individual basis by doctors and the patients (and NO ONE else). We patients have to live with the consequences of undermedication and we would have to live with the consequences of over-medication
6) Addiction is a disease of dopamine (what cocaine and methamphetamine directly release) and a certain ninety of people are going to become addicts, maybe their drug of choice will be cocaine, maybe heroin, but addicts don't get made, their born
7) socially factors play a significant role in addiction
8) heroin isn't spiked with fentanyl, it's spiked with an illicit fentanyl analogue with unknown potency. 9) Pharmaceutical fentanyl is a great pain reliever with few side effects and almost no euphoria when abused. Although, is does have a higher than average risk of respiratory depression in opioidnaive patients
9) The crack down on doctors is killing people because they went from oxycodone pills with known dose and potency and moderately high euphoria when abused and a low risk of respiratory depression to heroin and fentanyl analogues with unknown potency and less euphoria. That's why people overdose
10) cannabis is not a replacement  for opioids. Although it helps some people with some kinds of pain, it is mostly a good adjunct medication to enable opioids sparing.
11) There is no ceiling with opioids, they are safe at any dose if properly titrated.
12) Opioid overdose is extremely rare. Without mixed drug toxicity, people get sick before they overdose. "opioid related deaths" are any death that the patient had any opioid in their system when they died (they do the same hit job with Kratom). Usually, the real cause of death is combining alcohol with barbiturates and/or benzodiazepines

The answer to the opioid "crisis":
1) acknowledge that it is minor compared to the chronic pain crisis
2) full legalization where you can buy an opioid of a known potency and dose (methadone would be a good candidate to start with) at a pharmacy. You should have to meet withthe pharmacist and they should have to council you on the risks, offer information on treatment options if they believe you're addicted (or hearing that way), and sign an informed consent form.
3) They shouldn't be allowed to deny sale to any mentally competent adult
4) We also need to enhance the social safety net and make therapy and voluntary rehab free and readily available.
5) Stop making people "detox" when they go to rehab and immediately start them on methadone (big barrier to treatment)

We need to stop thinking that we can get everyone to stop taking drugs. We need to focus on making every addict a functional addict and making sure people who are ready to stop have help.

Pain patients need to stop being treated like addicts and we can't accept pill counts and urine testing (intended for dual diagnosis; chronic pain and addiction). It's no wonder the medical community thinks they can treat us like addicts, we've let them treat us like addicts for a decade. Doctors need to build a relationship with their patients, not blackmail them into one sided contracts that protect the doctor and strip away our rights while blackmailing is into high reimbursement, low success rate procedures, like steroid injections

Things have been really hard on my whole family for the past few years. I let my blog go for a while.

Today would be my mother-in-law's 48th birthday if she had lived. It's a hard day for us. Today, I got an email from Disqus to moderate a comment. It was just someone telling me that they liked my blog, but it was really sweetand well timed.

I have had an intrathecal pump since January 18, 2016 and my myPTM was activated about a year ago.
My intrathecal morphine peaked at
9.99mg/day basal
0.4mg/bolus over 1minute
Lockout 30 minutes
DRI 2/1hr
Max 6/day

I had them decrease the basal by just over 0.5mg per day due to side effects.

My wife has had a lot of complications since getting her pump February 28, 2017 that I'll try to get everyone up to date on. I've also considered switching to a vlog, but I'm not sure.

My wife and I had our quarterly pain follow up appointments with our PCP Wednesday afternoon. We always schedule two appointments ahead so that we don't have any problems getting in. When we reminded the receptionist that the appointment in three months wasn't adequate and she needed to schedule one in six months, she let slip the information that our doctor is leaving in four months. He has NO PLAN moving forward and hasn't even talked to any of the other providers in the office about taking on our cases. Every pain management office has refused our cases because they're medication management cases, which means that they can't make obscene money. The other doctors in the office have been extremely vocal about their objections regardless his management of our case. There are a few new providers that haven't chimed in, but two of them are PA-Cs (physician's assistants), which can't prescribe CIIs.

This is a novel compound, not a patent extension or reformulation. It's another sodium channel blocker, but it is being specifically developed for Trigeminal Neuralgia. I doubt this will be a game changer, but I do believe that having another treatment option has the potential to help many people.

If anyone is interested, I've updated the "About Me" section


-----Updated Text-----
I apologize for not updating this part of my site for a while, but I've been fighting with the incompetent, ignorant, rude imbeciles who run CYS (Children & Youth Services) for over six months concerning my wife's and my need for prescription opioids. I've been told that they've never gone after people as hard as they've been going after us, that includes heroin addicts and crack whores. They routinely lie on court paperwork, leak confidential records, commit perjury, and they're constantly change their story & accusations. We've had to prove that we are ill enough to require opioids, but not too ill that we can't care for our daughter. Thankfully, our family doctor has not abandoned us. He knows how much these medications help us and he knows that our daughter is well taken care of. Thankfully, my state has never had a law allowing children to be taken from disabled parents and there are federal laws (i.e. Americans with Disabilities Act) that protect us, slightly. Unfortunately, we still have to prove that our medical conditions don't prevent us from caring for our daughter. Aside from our doctor, we have our almost useless lawyer who can't schedule a meeting, and a great subcontracted (not a CYS employee) parent educator who isn't afraid to tell the truth, even if it isn't popular and even if it contradicts her conclusions. We've also been complying with their ridiculous WEEKLY urine drug testing (costs taxpayers $100/test per person). I really wish that they'd switch to saliva testing, or better yet hair testing, which covers the last 3 months (more, if you're willing to pay for it) instead of the 2-3 days that UDT (urine drug testing) covers. I did the math once and found out that you could buy a VERY nice car with the money that they've spent harrassing us and violating our rights. Privacy is a thing of the past.

I'm sure we all have many things we'd line to add (feel free to list them in the comments below), but this it's a great article.